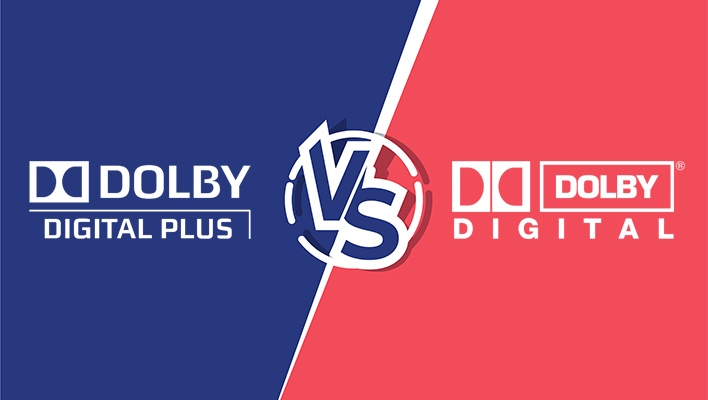 The two utilize an audio compression technology famously known as bitstream to decode surround sound. So, what’s the difference between Dolby Digital and Dolby Digital Plus? Let’s discuss these two in detail.

Dolby Digital, as the name suggests, is a digital surround format designed for a range of applications, including DVD, Ultra HD, Blu-ray Disc, digital streaming devices, gaming consoles, among others. Dolby Digital facilitates the efficient transmission of audio and video signals from a home theater receiver or processor to one or more channels.

The format uses the lossy audio compression technique to decode digital sound for different cinema needs. For you to get the most out of this surround sound format, you’ll need to get a home theater receiver that’s compatible with Dolby Digital. The good thing is that most AV receivers come with an inbuilt Dolby Digital decoder.

A Dolby Digital receiver contains up to six amplification channels, including five standard speakers (three front speakers, left surround, and right surround) and one subwoofer for the low-frequency effects. It is also important to note that Dolby Digital also supports mono and stereo sound modes.

What is Dolby Digital Plus?

Dolby Digital Plus was born to address issues of the limited bandwidth of Dolby Digital while improving surround sound technology. It is an enhanced sound decoding system that provides more bitrates than that of its predecessor, plus it supports more amplification channels (7.1 and above).

Another advantage that this format has over its predecessor is the ability to provide incredible sound quality from comparatively smaller audio files. This makes Dolby Digital Plus a popular choice among online media users looking for a more efficient sound decoding method.

Both technologies deliver an incredible surround sound experience, but they differ in the way they achieve the final result. The primary difference manifests itself in the compression bitrates and supported speaker channels.

Proponents of Dolby Digital consider the format to be the best option since it provides outstanding sound quality at a relatively low bitrate. However, although the data compression is efficient, the codec is still not quite at the same level as Dolby Digital Plus.

On the other hand, some experts argue that Dolby Digital Plus is more advanced and it provides increased and variable bitrates. In addition, its sustainable bitrates make it possible to provide efficient coding and better sound quality from less data.

Generally, both Dolby codecs are a step up from traditional home theater setups and they deliver a satisfactory surround sound experience. Ultimately your choice will come down to your preferences or whichever is compatible with the source material.

From the above discussion, it is easy to see that Dolby Digital Plus beats its rival and predecessor, Dolby Digital with higher bitrates. The Dolby Digital Plus guarantees a more realistic surround sound experience than less efficient and older digital sound formats. Nevertheless, Dolby Digital still commands a fair share in the market and a good number of audiophiles still rate it above competing Dolby HD formats.

With technology constantly evolving, your best bet is ensuring your components are up to date and that you’re using the best source material possible. That way, you can be assured of a thrilling cinema experience whether you’re using Dolby Digital or Dolby Digital Plus.