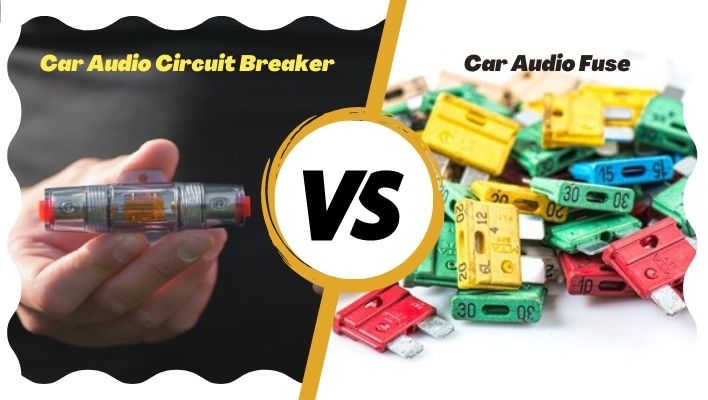 You’re installing a new car audio system, and you’re not sure if you should use a circuit breaker or a fuse. What’s the difference? And which should you use in your car?

In this post, we’ll explain the difference between a car audio circuit breaker vs fuse and help you decide which is best for your installation.

You’ve probably changed your car’s fuse or circuit breaker countless times, but did you know there are different types? The first step toward knowing which is best for your vehicle is understanding what each entail.

Fuses and circuit breakers are used to protect the components in your car. While they provide protection, they are expensive and must be replaced regularly. You need to save money and still enjoy quality safety. You just need to know which one is better based on the type of car you’re working on.

This article will compare these two automotive components and help you choose the right one for your car.

What is a car fuse?

A car fuse is a safety device that protects your car’s electrical system from overload. It is a small piece of metal placed in a wire circuit to protect the device from overheating or overcurrent. If the current flowing through the wire becomes too high, the fuse melts and breaks the circuit. Doing this prevents any further damage.

The fuse’s primary purpose is to prevent damage to your vehicle if too much current flows through it at once. Fuses are often used in conjunction with circuit breakers and relays.

Fuses cannot turn themselves back on after being turned off like switches do; instead, they must be replaced whenever their current rating drops below 50% (or whatever other amount is needed).

Fuses are typically rated by their amperage rating—the higher this number is for their type, the more powerful they’ll be able to handle without blowing up.

What is a Car Circuit Breaker?

A car audio circuit breaker is a device that protects your car’s audio system from electrical overloads. If too much current passes through the audio system, the breaker will trip and shut down the system to prevent damage.

It can be used to prevent unwanted power from flowing into the battery, and it must be replaced if it’s damaged or the breaker fails.

A circuit breaker can be thought of as an electric switchboard. Power flows through the circuits connected to it when it opens until they are all turned off again. They are turned off by closing another switchboard somewhere else in order for everything to be stable again.

The Difference Between a Car Audio Fuse Vs a Circuit Breaker

When it comes to car audio, there are a few things you need to know to keep your system running smoothly. The difference between a circuit breaker and a fuse is one of the most important things.

A circuit breaker protects an electronic circuit from damage. If something goes wrong and the current flow gets too high, the breaker will trip, shutting down the circuit. This prevents the equipment from overheating and potentially causing a fire.

On the other hand, a fuse interrupts the flow of electricity in a circuit if it exceeds a predetermined amount. Fuses are often used in conjunction with circuit breakers to provide extra protection.

So, which should you use in your car audio system? In most cases, it’s best to use a fuse. However, if you’re running a lot of power through your system or have installed an amplifier, you may want to consider using a circuit breaker instead.

There are pros and cons to using a circuit breaker vs a fuse in your car audio system. Here’s a breakdown:

The Downside of Using a Circuit Breaker

While a circuit breaker is an excellent option for protecting your car’s audio system, there is one downside: they can be easily tripped. If you have too many components drawing power from the system at once, it will trip. This can be a problem if, for example, you have a subwoofer and amplifier installed in your car, and both are drawing power from the system simultaneously.

If this happens, you’ll need to reset the circuit breaker before the system works again. So, if you’re using a circuit breaker to protect your car audio system, be aware of how many components are drawing power from the system at once and try not to overload it.

Fuses are much cheaper than circuit breakers, and they’re also easier to install. But they do have some drawbacks.

When to Use Fuses or Circuit Breakers

When it comes to car audio circuit breaker vs fuse, there are several considerations you need to make.

Read on if you’re concerned about any of these things and want to equip your car with a circuit breaker instead of a fuse.

Fuses are an excellent choice for circuits with a low current, like the AC power in your house. Circuit breakers are a good choice for high-current circuits like your car’s electrical system.

You can use either a breaker or fuse on any circuit in your vehicle. You just need to know how much voltage is drawn by each device you connect. The higher the amperage rating, the more likely you will have a blown fuse if something goes wrong with its safety features.

Choosing the Best Automotive Circuit Breakers vs Fuse for your Car.

Choosing the best automotive fuses and circuit breakers for your car is essential to protecting it from damage.

How to Install a Circuit Breaker

If your car audio system isn’t working the way it should, don’t worry—we’re here to help. In this section, we’ll provide some troubleshooting tips for common problems.

When it comes to your car audio system, you have a couple of different options for protecting it from short circuits: a car audio fuse vs circuit breaker. So, which one should you choose?

Well, it depends on your setup. If you have a lot of amps running through your system, you’ll want to use a circuit breaker to protect them. A fuse will do the trick if you’re only running a couple of amps or less.

Fuses and circuit breakers have their advantages, but they’re not always the best choice. If you’ve got a car that needs to be handled with care, use your best judgment when deciding whether or not to use one of these devices.

The important thing is that you understand both the pros and cons to make an informed decision based on what’s suitable for your vehicle installation. We hope our guide has enlightened you on the best choice. All the best.