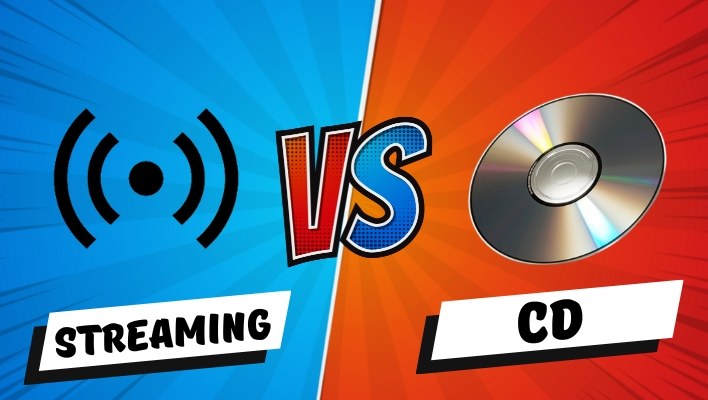 Despite this, there are still many people who prefer to buy CDs or download music onto their computers or phones. So, which is better? Let’s take a look at the pros and cons of each format to try and answer that question.

CDs (Compact Discs) are an optical storage medium that uses lasers to store data. This data is stored as a series of microscopic pits and bumps on the surface of the disc. CDs can store up to 700MB of data, and are most commonly used to store music, but can also be used to store other forms of data such as videos and software.

CDs are most commonly played on CD players and other audio devices, and can also be used to transfer data to computers.

Streaming delivers digital media in small chunks, or “streams”, which can be accessed as soon as they become available. This means that users can start listening to or watching digital media almost immediately, without having to wait for the entire file to download.

Streaming is becoming increasingly popular due to its convenience and the availability of high-speed internet.

What is the difference between CDs and streaming?

One of the biggest differences between CDs and streaming services is cost. CDs require a one-time purchase fee, which can range from a few dollars for a single album to more than $20 for a box set.

On the other hand, streaming services offer access to millions of songs for a monthly subscription fee ranging from $4.99 to $14.99 per month depending on the service.

For those who want to save money, streaming is usually the cheaper option in the long run, since you’re not paying for each song or album individually.

CDs take up physical space. Not only do you need room for all your discs, but also some place to store their cases, as well as any booklets or inserts that come along with them.

Streaming music doesn’t take up any physical space since it’s all stored in the cloud, so if you’re short on room in your home or apartment, then streaming may be a better choice for you.

The sound quality of CDs is generally considered superior to that of streaming services, since they don’t have to be compressed like streams in order to be transmitted over the internet.

That being said, some streaming services offer “high-definition” audio files that are comparable in quality when compared side by side with CDs.

CDs are great for listening at home, but they aren’t very portable. You can bring them along on car trips or vacations, but it can be cumbersome if you want to carry multiple discs with you wherever you go.

Streaming music, on the other hand, is easily accessible no matter where you are as long as you have an internet connection or a mobile data plan. You can stream your favorite songs while driving down the highway or relaxing on the beach thousands of miles away from home.

Finally, there is a major difference between CD selection and streaming selection. Streaming offers access to millions of songs from pretty much any artist imaginable, while CD selection is limited by what stores are selling at any given time,

This means that if you want something rare or obscure, then chances are it won’t be available on CD, but could potentially be found on one of the many streaming platforms.

The question ‘are CDs lossless’ is an important one. Lossless formats are those that do not lose any data when they are compressed and stored, which is why they are often preferred for archiving or sharing music files.

CD audio is considered to be a lossless format because it does not lose any of its original data when it is copied from the original source.

Streaming services such as Spotify, Apple Music, and Pandora use digital audio compression, which can result in some data loss. However, many streaming services offer high-quality audio streams that are essentially lossless.

Ultimately, CDs remain the most popular choice for those looking for a truly lossless experience when listening to music.

CD vs. Streaming – Pros And Cons

1) Quality: CDs are still considered the gold standard when it comes to audio quality. CDs are able to reproduce sound in a way that is closest to the original recording. This is because they store audio in an uncompressed form, meaning that the audio is not compressed or altered in any way.

1) Price: CDs can be expensive, especially if you want to buy a whole album. Streaming services offer more affordable options for listeners who just want to listen to one song at a time.

2) Limited Selection: The selection of music on CD is limited compared to what is available on streaming services. Not all albums and songs are available on CD, so if you’re looking for something specific, it may not be available in this format.

3) Lack of Flexibility: CDs are not as flexible as streaming services, as you can’t access the music from multiple devices, or instantly switch between different artists or albums.

With streaming services, you have the flexibility to customize your listening experience how you want it.

1) Convenience: With streaming services, you can access millions of songs with just one click. This makes it incredibly convenient for listeners who want access to their favorite music quickly and easily.

2) Price: Streaming services offer much more affordable options than buying physical copies of albums or individual songs. You don’t have to commit to buying an entire album—you can just pay for one song or subscribe for an affordable monthly fee instead.

3) Variety: Streaming services offer an incredible variety of music from all different genres and eras. This gives you access to music that may not be available in physical formats like CDs or vinyl records.

1) Quality: While some streaming services do offer high-quality audio streams, most are compressed in order to conserve bandwidth and storage space. This means the sound quality isn’t as good as it would be from a CD or other physical format.

2) Internet Dependency: Streaming requires an internet connection, so if you don’t have access to Wi-Fi or data service while traveling or away from home, then streaming won’t be an option for you.

3) Ads & Limitations: Some free or low-cost streaming services feature ads or limits on how many times you can listen to each song per month.

At the end of the day, it is up to you to decide which format is better for you. CDs offer superior sound quality, but they can be expensive and take up a lot of space. Streaming is convenient and cost-effective, but the sound quality can vary depending on the service and audio quality setting you choose. Ultimately, it is a matter of personal preference.