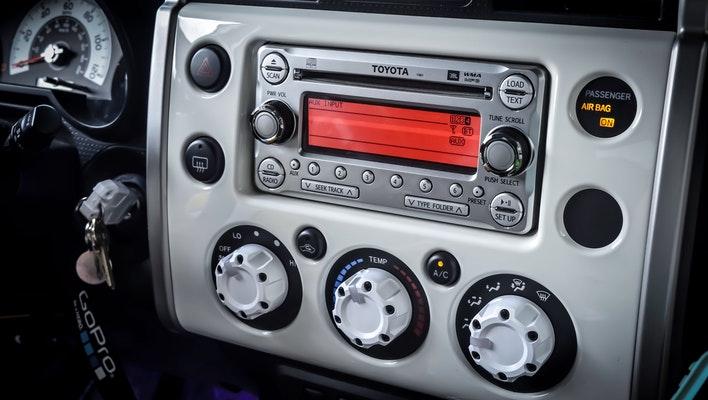 A car stereo’s faceplate plays several roles as one of the major components of a car stereo system. It provides the system with good support that makes it easy for drivers to operate the car stereo. However, due to their design, they can easily be stolen or damaged, posing a problem. And then you might have to start looking for a replacement. Because of how the faceplate for every stereo brand appears similar, you might ask, are car stereo faceplates interchangeable?

Yes, it is possible to switch car stereo faceplates between different brands. However, most times after switching, you might not fully enjoy the features of the stereo like before. The stereo might not display properly, and then there is the issue of freezing buttons. Regardless, with the right choice, you can get lucky and get a faceplate that is compatible with your stereos head unit.

This guide narrates the possibility of interchanging faceplates of different stereo brands.

So, probably you are at a loss in your car’s audio system. It might be the faceplate of the stereo is missing or broken. You probably got a faceplate of an entirely different brand in the garage, and then you are wondering, are car stereo faceplates interchangeable?

In a quick reply, it is possible to swap car stereo faceplates of each brand. However, it is vital to note that this doesn’t always apply to all stereos. While it’s possible to switch car stereo faceplates, they can often turn out not to be compatible with the stereo. This can make the stereo to malfunction in the future, summing up to the extra cost.

Then you might as well consider the cost of replacing the faceplate. As a matter of fact, faceplates almost cost 80 – 90 % of the total price of buying a complete car stereo. Hence, it might be best to opt for a new stereo entirely considering the cost. Regardless, if you plan on getting a faceplate, it’s best to buy one that fits the car stereo’s head unit. However, this isn’t always easy, especially due to the high stereo theft in many places.

With that said, it might not be easy to get a faceplate replacement due to certain industry standards. It can even be more demanding when you are not the initial buyer of the vehicle. Most industries tend to request a series of documents to prove ownership of the stereo. This is one of the measures put in place to reduce theft. Nevertheless, it’s much easier to get a fairly used faceplate in the market.

There are certain stereo brands that stand out in the car stereo market. They are known for their beautiful designs, features, durability, and functionality. They include Kenwood, Sony, Pioneer, Alpine, and JVC. Seeing that they comprise the majority of car stereos cars, you might wonder are they interchangeable. The answers are listed below.

Most times, after swapping a pioneer car stereo faceplate, you might notice a few problems. It’s either there is no display light, or maybe a button or two might not be working properly. Therefore, it’s better to go for a replacement instead. To get one, contact the producers and check if they still produce the same model.

JVC is yet another extraordinary car stereo producing company located in Japan. They have also made quite a name in several home audio appliances over the years. Compared to the other stereo brands, you can easily switch the faceplates of different JVC car stereo models. However, you might still notice a few problems in the functionality of the car stereos. Therefore, it’s better to buy a faceplate that matches the head unit of the stereo.

Sony Audio stereos are unique because of their new-age designs. Sony audio stereos are so sleek, making them irresistible. What’s more, most car companies tend to adopt their stereo models during production. However, they might be quite pricey than others. The same thing applies to their faceplates. Therefore, you might have to be careful not to damage them. If the faceplate gets spoilt, it is only possible to switch faceplates with head units that are compatible.

Also, note that it’s not entirely feasible to switch certain new generation car stereos nowadays. This is especially true because the company started adding unique features for every car stereo model. With that said, there are higher chances of swapping old Sony car stereo models.

Kenwood makes their car stereo in a way that it’s only possible to switch faceplates with the same model. This means that you cannot swap the faceplates of a different car stereo model with that of a Kenwood model. They also produce quite a decent number of car electronics to help drivers enjoy their every moment on the road.

Alpine car stereos can easily fit, and they work quite well when you swap them with faceplates from other brands. But a few of the stereos might still have the problem of button freeze. Sometimes a few car owners always complain of not seeing anything on the display when they swap their faceplates. Therefore, if you seek a non-interrupted experience, best go for faceplates that have the same head unit.

For most people, it might probably be that your faceplate got a crack. Maybe it got hit by an object which broke the faceplate. If this is the situation, it’s best to try to fix it instead of changing it completely. As you’ve seen, the complications involved in interchanging a faceplate are not easy.

With that said, it’s not always certain that you’ll enjoy the complete features that the car stereo offers when you swap faceplate brands. Furthermore, if you forcefully install a faceplate on a car stereo, there is the risk of ruining the vehicle’s stereo system. Therefore, depending on the extent of the damage, try repairing it first. There are a few steps to take to repair a broken faceplate, but first, you’ll need a few materials and tools like:

It’s possible to get an engineering adhesive and screwdriver in any engineering store around. Although, a few supermarkets might have them too. It is crucial to note that these adhesives are way different from the normal glue in the stores. Many engineers use them for complex projects like welding, furniture making, etc. Here are some basic steps for fixing a broken faceplate:

As a matter of fact, many car stereo brands are creating faceplates from a metal-like material called chrome. However, the problem with this material is that when it is damaged, there is no means to repair them. This means if your car stereo’s faceplate falls under this category, this process will not work. At this point, the only solution is to replace the faceplate or check if it’s possible to swap it. With that said, if you’ve checked the damage to the faceplate, and it isn’t as bad as it seems, proceed.

2. Removing the faceplate of the car stereo.

If the faceplate is damaged already, it’s best to be really careful while at it. This is important because if you further damage the faceplate while you are uninstalling it, there might be no other choice but to replace it. To eject the faceplate, gently pull it out from both ends with both fingers at the edges of the faceplate. What you should listen for is a clicking sound. This is the sound that the fasteners of the plate give off when placed or removed.

If it’s harder than it should be, best to use the screwdriver to unplug the fasteners from the head unit. It’ll probably be easier with a flat head screwdriver than a star head. If all goes well, congratulations are in order; you have passed one of the hard steps. However, if you have made a mess of the faceplate, there is nothing else to do but look for an alternative.

3. Fixing the faceplate for the car stereo.

After removing the faceplate, place it on a wooden working table. Then keep the broken pieces of the faceplate side by side with each other. Once everything is in order, look for a container to mix the adhesive. It can be the cover of a drink from the trash or a disposable cardboard paper. Also, while mixing, mix properly according to the instructions on the product.

After mixing, use the needle or toothpick to pick minute quantities and apply them to the broken edges of the plate. Afterward, slightly press the broken edges in position, just until the adhesive coats the split surface. Hold for a few minutes, then drop the faceplate back on the table to dry.

All that’s now left is to clean the surface off any excessive adhesive and wait 30 – 40 minutes to dry. After everything is set and fixed, install the faceplate back to its position. The fasteners will tell you when they are properly fixed.

In summary, this procedure requires quite a lot of patience and steady hands for the best results. Therefore, it is best to do this in leisure time and away from distractions or prying hands.

Did your car stereo’s faceplate get damaged or stolen? Thinking of swapping it with a random one from the store, asking, are car stereo faceplates interchangeable? It is possible to swap the old faceplate with that of a different brand. However, you have to check certain things first before proceeding. This includes compatibility with the head unit and functionality of the car stereo. If the faceplates aren’t compatible with the head units, then better not swap at all. To learn more, read up.