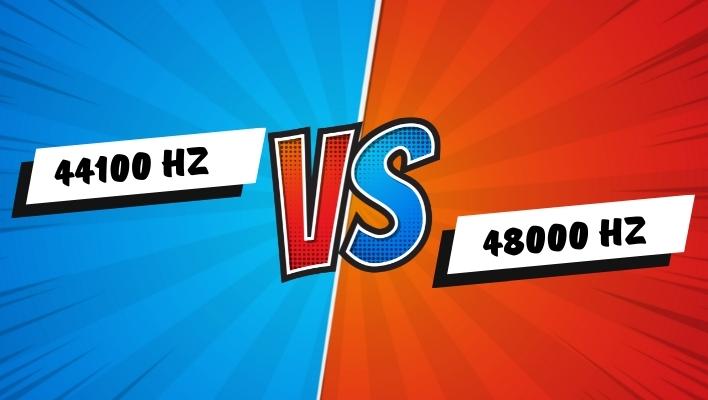 Audio sampling is perhaps one of the most critical processes during music production. The sampling involves converting a file from an analog or any other source into digital data. This process takes place inside your computer and involves a series of activities.

The importance of digital audio recording is to allow music producers to sample, store, transmit and retrieve audio signals without sacrificing quality. It achieves this by taking samples of the analog sounds from different sources at regular intervals before finally doing the conversion.

Generally, the more sample your computer takes, famously referred to as ‘sample rate’, the higher the chance of the final file resembling the original content. Furthermore, a higher sample rate often leads to high-quality audio reproduction.

Today, we’ll learn the difference between 44100 Hz and 48000 Hz and explore the impact of the two formats on the quality of your digital files. That said, let’s begin our discussion!

For applications that require you to capture the entire human hearing range (i.e., 20–20,000 Hz), you’ll need to sample the audio waveforms using a standard sample rate. Such applications include music production or recording of any kind of acoustic event.

The 44100 Hz and 48000 Hz are by far the most used sampling rates in standard music production. The two deliver more accurate recordings, plus they allow music producers to edit, mix and manipulate data without compromising sound quality. Now let’s explore the two sampling rates in detail!

The 44100 Hz is a common sampling frequency used in sampling analog audio recording. In some cases, the sampling rate is represented as 44.1 kHz, but it basically means the same thing. When using the 44100 Hz to record audio, the computer is programmed to sample 44100 samples per second. The samples are then used to recreate the audio signal for playback.

Apart from CDs, 44100 Hz was used as the standard recording format for DVDs in the 1990s and HDMI in the 2000s. Today, most modern recordings are sampled using 44100 Hz, and this is mostly attributed to the simplicity of the sample rate and how human ears respond to different sound frequencies.

The best thing about this sample rate is that it gives you the option to compress a large file size into a compact and manageable MP3 file without altering its quality. Ideally, compression involves removing most of the recorded data that your ears can’t pick up. However, you may want to be extra careful, as over-compression can ruin your final recording.

The science of sampling borrows quite a lot from the Nyquist-Shannon theorem, which states that “for you to yield the best audio quality, you’ll need a sampling rate that is at least twice the audio frequency of the original file”. It also emphasizes that using anything less than this is going to be detrimental to the quality of the sound being reproduced.

Now, considering that a human ear can hear up to 20 kilohertz (kHz), using a sample rate of 44.1 kHz is more than what is required to accurately reproduce sounds in the basic range for human hearing (i.e. 20,000Hz).

Some music recording applications require you to use higher sample rates in order to capture a wider sound range. This is where the 48000 Hz audio sampling comes in to allow you to hear sound frequencies that would otherwise be inaudible when recorded using a lower sample rate.

The 48000 Hz provides clearer audio with minimal noise, and it has proved useful in mastering and mixing audio. The higher sampling rate also allows you to manipulate the recording in a way that allows you to hear some of the sounds that may be missing in the lower sampling.

Owing to the popularity and simplicity of CDs, the 44100 Hz is the most widely used sampling format, and there is a great deal of equipment that supports the format. As such, the majority of music recorded in the past is available in 44100 Hz.

The 48000 Hz is equally popular, and most modern recordings use this rate instead of or in addition to 44100 Hz. In addition, 48000 Hz is the standard rate for most video applications, but audio recordings that use CDs are mostly available in the 44100 Hz output.

However, most audio equipments that come with a digital-to-analog converter are generally designed to operate using either 44100 Hz or 48000 Hz. Such equipment includes standard HDMI TVs that use a DVD player to play audio content from a CD or VCD.

On the flip side, most old processors only support the 44100 Hz output with only a few modern ones supporting a 48000 Hz output. Similarly, Blu-ray discs and DVD-Video players only accommodate 48000 Hz. This is because these music sources require a higher sample rate which translates to high-quality audio reproduction that is also closer to the original file.

Audio experts, especially those who have been in the field for some time, argue that they can easily detect the difference between the two formats in terms of overall clarity. However, we believe that the 44100 Hz is more than adequate for most home and studio applications. In terms of sound quality, the two are at par, and the difference is only noticeable during sampling and recording.

Learning how to mix music can be quite a fulfilling experience, but that is the easier part. As a beginner, it may be hard to pick the difference between music recorded using either of the audio formats. There exists a very thin line between 44,100Hz and 48,000Hz, and more often than not, the difference in sound quality is not something that our ears can perceive.

Also Read: WASAPI vs ASIO- Which is the Best Audio Driver?

The two formats are simply a measure of quality and unfortunately, the difference in terms of audio quality is rarely picked by our ears. However, you’ll need to be careful to avoid mixing the two while mixing and recording your music files. This is because audio sampled in one format and played in another one risks being slowed down or speeded up.