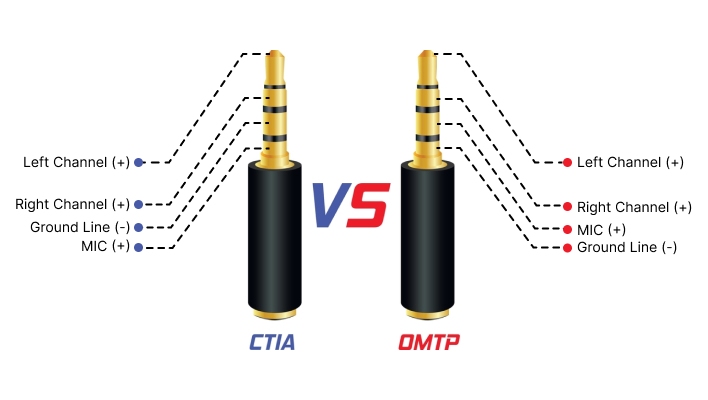 The 3.5mm headphone jack has been a mainstay of the audio industry for decades, but in recent years there has been a growing divide between two competing standards: CTIA and OMTP.

While both are designed to provide a reliable connection between headphones and audio devices, there are some important differences between them that users should be aware of before making their purchase.

In this article, we’ll take a closer look at these two standards and explore how they differ from one another.

The CTIA (Cellular Telecommunications and Internet Association) is an international non-profit trade association that represents the wireless communications industry. It was founded in 1984 to promote the growth of the wireless industry and ensure its success by providing resources, standards, and advocacy for its members. The CTIA also serves as a forum for policy makers, regulators, and other stakeholders to discuss issues related to the industry.

The CTIA has established several standards for mobile device manufacturers to follow when designing their products. One of these standards is the CTIA headphone jack standard which defines how headphones should be connected to a mobile device. The goal of this standard is to ensure compatibility with any device using the 3.5mm headphone jack from different brands.

The design of the CTIA jack allows it to be inserted into a port without having to twist or rotate it like with some other types of connectors. This makes it much easier and faster to plug in devices compared to traditional connectors.

In addition to its ease of use, another benefit of using a CTIA jack is that it provides better sound quality than other types of connectors due to its ability to reduce interference between signals. This is because each pin has its own dedicated channel for transmitting audio or video signals which helps reduce crosstalk between them.

This improved sound quality makes it ideal for use with headphones and other audio equipment that require high fidelity sound reproduction.

OMTP stands for Open Mobile Terminal Platform, which is an open-source platform developed by Nokia. It was designed to provide a universal connection between mobile phones and headsets, similar to the CTIA standard.

The OMTP jack is similar in size and shape to the 3.5mm CTIA headphone jack that is found on most consumer electronics devices, and also has four conductor points. However, these points are not used in the same way, or in the same order as CTIA.

The OMTP jack also has built-in protection against static electricity that can damage sensitive components in a mobile phone’s circuitry. Additionally, its design helps reduce crosstalk between connected devices – this means that there will be less interference from one device’s signal when another device is connected to the same port.

You must understand that both CTIA and OMTP are used for 3.5mm headphone jacks. The CTIA standard is the more common of the two and is used by most phone manufacturers.

So, what’s the difference between the two standards? While both of these jack standards have four conductor points, or the “bands” that you see on your connector), the order in which these points are used varies.

As you can see, the CTIA standard has the microphone connection at the sleeve end, with the signalling (or ground) connector on the second ring. This is what HTC devices use, as well as some recent models from Nokia and Sony. Apple uses a similar type of connector, but their microphone and control signalling is not in line with this standard.

On the other hand, the signalling connector on OMTP is next to the sleeve, with the microphone connector on the second ring. This is the opposite of the CTIA arrangement. Most mobile phones use this arrangement, including Samsung smartphones and older Nokia and Sony Ericsson smartphones.

Swapping an OMTP headset for a CTIA one, or the other way around, will cause the sound to be either very faint or inaudible. To avoid this issue, adapters that can convert between the two types of headsets are available, though they do add extra size and may not work properly with remote control features.

By now you must have understood that though both CTIA and OMTP are used for 3.5mm jacks, there are some differences between the two standards. Therefore, it’s important to make sure you’re using the correct type of headphone jack when connecting your device to your headphones or other audio equipment.

Fortunately, there are adapters available that allow you to convert from one type of jack to another. For example, If you have an OMT-compatible device, but need to connect it to a pair of headphones that use the CTIA standard, you can purchase an OMTP to CTIA adapter. This allows you to do so without any issues.

Understanding audio jack standards is an important part of choosing the correct components when buying headsets, microphones, adapters, or other similar accessories.

While there may be slight variations within each manufacturer’s products related to physical appearance, all modern headphones should follow either the CTIA or OMTP arrangement, regardless of who made them.

Furthermore, if you ever find yourself needing to connect an OMTP-based headset into a device using CTIA or vice versa, then you should consider purchasing an adapter. This will allow you to do so without sacrificing sound quality or features offered by your original product.