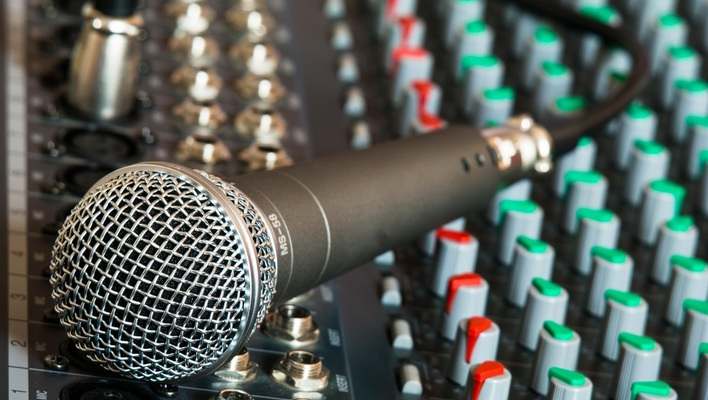 Every musician’s dream is to perform on the biggest stages in the US and beyond. However, sometimes this dream dies prematurely due to the lack of a platform that allows newbies to grow until they command respect in the music industry.

But, have you ever thought of performing karaoke in your living room till you perfect the art? There’s no tension of being booed just in case you fail to impress, and you’ll still save a few bucks.

That’s the essence of this article! We break down for you different ways of connecting a microphone to your home theater system to give your room the perfect stage effect.

Read our articles on how to connect a microphone to a receiver and be enlightened.

How to Connect Microphone to AV Receiver

As you may have noticed, most of the wired microphones today have a 3.5mm jack. Coincidentally, modern home theater systems also come with a 3.5mm input that perfectly fits the microphone’s jack.

Sometimes you might be tempted to plug your microphone into the stereo receiver and get started.

Unfortunately, that will not always be the case.

The microphone cables may fail to fit into the jacks due to the non-uniformity of the jack’s diameter. In such cases, the standard XLR adapter may be required. The XLR adapter features three to seven prongs that allow you to fit your microphone into its jacks.

The microphone input is a port specially designed to receive mic-level signals. Therefore, coming up with ways of changing mic input to output sound will guarantee you more options for recording sound on our devices.

Follow these steps once you’ve settled on whether to use mic input or the XLR adapter.

How to Connect Wireless Microphone to Receiver

Connecting a wireless receiver requires more than just the plug and play concept in corded microphones. There are several types of equipment that we should look at before addressing how to connect a wireless microphone to a receiver.

Here are the instructions for connecting your wireless microphone to a receiver.

Always remember to use fully charged batteries for your wireless microphone. Also, adjust the frequency on the wireless receiver and microphone whenever you detect interference.

FAQs About How to Connect a Microphone to Home Theater System

The discussion around connecting wireless microphones with a receiver is surrounded by hot debates that never end.

Can my wireless microphone work with any receiver?

Well, for your microphone to work effectively with a receiver, it should have compatible frequencies, proprietary digital conversion methods, and secure 128 or 256-bit data encryption.

Always go for matching receivers and microphones from the same manufacturer to save yourself the worries.

Can I pair two transmitters for wireless microphones with a single receiver?

Think of this scenario as having two radio stations transmitted in the same region within the same radio frequencies. It will be such a mess because the radio waves from the two stations keep interfering with each other.

In simple terms, it’s IMPOSSIBLE to use two wireless microphones with a single receiver. The reason is that the signals will interfere with each other and because the receiver can decode only one signal from the microphone at a time.

Is it advisable to connect the mic input to AUX input?

It’s possible to plug a non-balanced and high-impedance microphone into the AUX input. However, the signal you get will be noisy and feeble since the preamp isn’t designed for a low output device.

Which gadgets can I plug into my microphone?

Microphones are designed to plug into a wide range of home audio and devices such as guitar amp, camera, mixer, audio interface, standalone preamp, and audio snake.

Why Should You Learn How to Connect Microphone to Stereo Receiver

Buying a dedicated Karaoke machine can be costly. But, with the right connection between your stereo receiver and the mic, you can always bypass this challenge.

In addition, you can also use this concept to add any of your musical instruments or digital cameras to this setup and continue working from home. Tough covid times should not hinder you from doing what you love most.

Getting the right connections guarantees you the best performance from your microphone, whether wired or wireless. You’ll save money and time by buying less expensive gadgets. All you need is to make good use of the available home theater system and microphone in your home.

So, what do you need your microphone for? Share with us today.