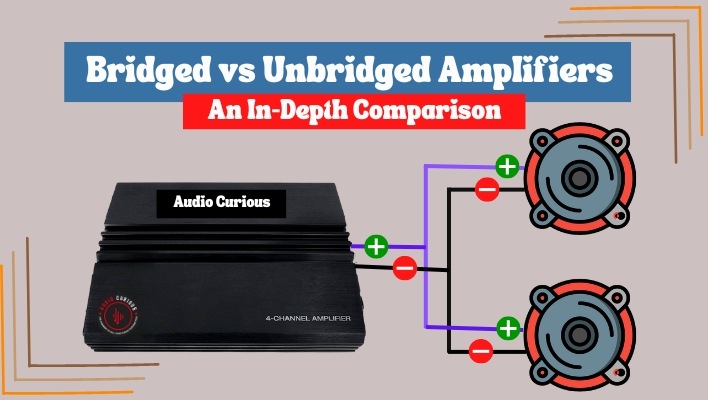 If you’ve ever considered using an amplifier to get the most out of your sound system, then you may be curious about bridged amp vs unbridged amp. Whether you’re a professional sound engineer or an amateur music enthusiast wondering – ‘should I bridge my amp’ – it’s important to understand certain things. For instance, how these two types of amplifiers differ and what each can bring to your audio setup.

In this blog post, we’ll take an in-depth look into bridged vs unbridged amps as well as full bridge vs half bridge amplifier, so that you can choose the one that best suits your needs.

What Is A Bridgeable Amp?

A bridged amplifier is an electronic audio amplification system in which two or more amplifiers are combined to share a common signal. This type of configuration allows for higher power output than a single amplifier. It is commonly used in high-end audio systems, car audio systems and home theater systems.

Bridged amplifiers offer many advantages over single-channel amps, including:

The most common application for this type of setup is to bridge two stereo channels into one mono signal for maximum output power.

When two separate amplifiers are connected in a bridged configuration, the output from each channel is sent through its own speaker or another load device. The input from each side of the amplifier is also doubled. One-quarter of the total voltage (or current) on the input side will be sent to each side of the bridged amp’s output section.

The result is that when both outputs are connected together, they function as one much larger power source. This increases the potential maximum power an amplifier can produce. It also encourages greater dynamic range and headroom.

An interesting thing to note is that there is also a half-bridge amplifier. How is it different? Let’s find out!

Full Bridge Vs Half Bridge Amplifier

On the other hand, half bridge amplifiers require only one power supply and two transistors for amplification. They are less expensive and consume less power than full bridge amplifiers, making them ideal for low-power audio applications.

Using A Bridging Amp – What Are The Advantages?

By running both outputs separately in parallel, you can maintain equal levels between all speakers/devices. And you would not have to worry about impedance mismatches or overloading any device’s capacity.

Additionally, by using a bridging amp setup, you can achieve increased efficiency. This is because, compared to normal stereo configurations, less current is drawn from the power supply, resulting in less energy being lost as heat during operation.

This makes for more reliable operations even under heavy-use scenarios such as powering multiple subwoofers simultaneously.

What Is An Unbridged Amplifier?

An unbridged amplifier is a type of audio amplifier that is designed to be used in an audio system without being connected to any other type of amplification device. Unbridged amplifiers are able to provide power to a single set of speakers or another audio device, such as a subwoofer, without the need for a separate bridge amp.

This type of amplifier is typically preferred by enthusiasts who want to get the most out of their sound system and don’t want to buy separate components for each speaker.

Class A/B amps are often used for home theater systems as they are capable of producing higher levels of power with less distortion than other types.

The downside is that these types tend to be more expensive and require more maintenance than their counterparts.

On the other hand, Class D amplifiers offer the highest level of power. They use fewer components and generate less heat. This makes them ideal for car audio systems where space may be limited.

Regardless of the type chosen, unbridged amplifiers provide users with great flexibility when it comes to optimizing their sound system setup.

Unlike bridged models, the advantages of these units are –

This means that you can focus on fine-tuning your setup rather than spending time installing multiple components—allowing you to enjoy your music sooner rather than later!

The benefits of using a bridged amplifier are numerous, and include increased power output, greater headroom, and improved thermal stability.

The main benefit of a bridged amplifier is that it has the ability to produce twice the voltage of an unbridged amplifier. This means it can drive your speakers with more power and deliver a much louder sound.

Additionally, since two amplifiers are used in the bridged configuration, it eliminates the need for larger transformers and heat sinks, which further reduces power consumption.

A bridged amplifier also provides greater headroom than an unbridged unit, as twice the voltage is available at all times. This allows for higher volume levels before clipping (distortion) occurs – allowing you to turn the music up louder with no distortion.

Furthermore, since two amplifiers are used in a bridge configuration, they act as each other’s heatsinks, ensuring better thermal protection. This is beneficial when running elevated sound levels for longer periods of time.

On the other hand, using an unbridged amplifier has many benefits. It requires fewer components, lower operating voltages, and can be half the cost of buying two separate amplifiers.

If someone needs only one channel or is not looking for high levels of output (loudness), they may opt for an unbridged amplifier.

Which one should I use for my home audio system?

In conclusion, the type of amplifier you select will depend on your individual requirements – how much power you need from your amps as well as if cost is an important factor for you.

Bridging offers several advantages such as increased power output and better thermal control, but if cost is an issue, then going with an unbridged option could be more cost-effective.

In order to make a purchasing decision about which amplifier is best for your needs, it is important to understand the difference between bridged and unbridged amplifiers. Both have their own benefits and drawbacks that need to be considered before making a purchase.

We hope that this article has helped you to better understand the differences between these two types of amplifiers so that you can make an informed decision about which one is right for you.