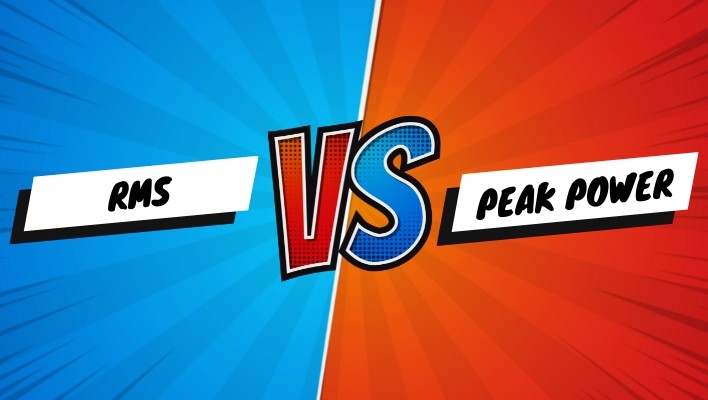 First things first: you may have already seen the term “RMS” on speakers, audio amplifiers, and other audio-related components. RMS is an abbreviation for root mean square, and a calculation is done to determine how much power an amplifier can provide continuously.

The significance of RMS power is sometimes misunderstood and overlooked. Now, you don’t need to actually understand how it is calculated, but understand this: RMS power is a good estimate for power figures, much better than Peak power values.

Peak power, on the other hand, is generally a measure of the maximum amount of power an amplifier can provide in brief bursts. If any audio component operates in that condition for an extended period, it can be destroyed.

As a result, you should pay much more attention to an RMS, or continuous power specification, as opposed to the peak power rating.

The power rating of an amplifier represents the power that the unit will deliver to a specified load at a specified distortion level and over a specified frequency range. Two methods are commonly used to specify the output power of amplifiers and the power handling of speakers.

Peak power is often specified for most speakers and amplifiers, particularly inexpensive ones, but is essentially meaningless. This is because peak power specifies the maximum instantaneous power, an amplifier can deliver (or the maximum power a set of speakers can handle), but it still does not say anything about how much power it can deliver continuously.

The RMS (root mean square) power rating is more useful in this regard because it specifies how much power the amplifier can deliver continuously to a set of equally rated speakers. It uses average values instead of peak power to give a better idea of the capabilities of the amplifier.

Most head units include an amplifier, but don’t believe manufacturer claims of “high power” are enough to power a decent car audio system. Typically, when a head unit is described, power ratings per channel are specified, for example, 100 watts x 4 channels.

This is usually not the case, as a 100 W per channel power rating is too high for most car head units. If you see these kinds of ratings on a low-cost brand head unit, it means the manufacturer has given you a peak power rating.

Although most car audio head units have built-in amplifier sections that use integrated circuit (IC) technology to produce power, they are limited by the current supplied by the car’s battery and alternator. This is about 12-13 volts, and power delivery is at most about 210 watts max, although the true RMS or continuous power it puts out is a little less than that – around 180 watts.

RMS values are typically much lower than the peak value, but they more precisely constitute what the head unit is capable of putting out. Comparatively, peak power only handles the absolute load of voltage that a speaker or amplifier can hold for a split second without blowing. There is no specific clarity on how long the power can be sustained, but it’s typically very short.

An audio signal generated by a head unit doesn’t have enough power to drive car speakers. The signal has to be amplified before it can move a speaker’s voice coil and subsequently the speaker’s cone. The larger the cone, the more power is needed to move it.

That’s why tweeters require very little power and subwoofers require a lot. Amplifiers take the low-level audio signal generated by a head unit and run it through circuitry that turns it into a high-level, or amplified, signal. Before sending the signal (the input) to a loudspeaker, a transistor-based amplifier enhances it numerous times so that the quality of the sound is improved.

Many power amplifier manufacturers used to brag that their amps generated a precise RMS power level, which was thought to be far superior to just reporting peak power figures. The RMS value of the audio signal was connected to the equivalent power consumed by a DC signal in this context. Consider an amplifier rated at 200 watts RMS @ 8 ohms.

What this would mean that the amp is well equipped to deliver said 200 watts continuously, even though that it may sometimes deliver more than that. Here comes the concept of peak power ratings which explains why the amp is able to put out a higher value of power than the RMS value.

Separate or outboard amplifiers are, of course, also limited by the current supplied by the car’s charging system. But they have dedicated switching power supplies that are capable of producing much more power. However, these switching components are too large to fit inside a head unit and generate too much heat to be installed in a vehicle’s dash.

20-watt RMS or 30-watt RMS speakers—what’s the difference? Essentially, this figure stands for a speaker’s average power-handling capability. You can run speakers at or below this figure all day long and not worry about damaging them.

With that being said, 30-watt RMS speakers are able to handle more power – specifically 10 watts more, while the 20-watt one’s can only handle 20 watts. This is pretty simple to understand, but if you run 20-watt speakers with a 30-watt power source, you’ll end up ruining them.

As mentioned, the average value that any loudspeaker can withstand is referred to as “continuous power handling” or “RMS power handling.” It is typically quantified with either a sine wave or a modulated noise source. The human ear hears sounds at lower volumes than it is actually exposed to.

A 1 kHz sine tone, for instance, is approximately 94 dB at 0 dB (RMS). This tone will sound as loud as the actual 94 dB level if you play it through your sound system. Properly used, the continuous power rating is a worst-case specification and represents the maximum heating of the component voice coils.

Most sound systems are rated for their maximum RMS power output. So if your system puts out 30 watts RMS and your speakers are rated at 30 watts RMS, you’re in good territory. However, speakers are sometimes rated for their peak power, or the amount of output they can handle for a short period of time. Always refer to the manufacturer’s manual for this kind of information.

This figure is about 1.5 times the value of the RMS or safe value. If you run your speakers at this level for very long, you’ll ruin them!

So, how is the RMS value calculated?

Wonder why the RMS rating is a better estimate of power? Consider a simple sine wave voltage graph, as shown below. “RMS” stands for root mean square, and we already mentioned this earlier.

Simply divide an original value (by taking points on the graph) by the square root of 2 (for example, at 90 degrees, the value is 1, and 1/√2 = 0.7071), and you have an RMS value – minus the mean part of course. A new graph is then plotted which shows all these RMS values. We see that the new RMS sine wave is actually of a shorter height, lower values.

The mean, or average, value is taken by summing up individual values and then dividing by the number of values. We’ve done exactly this, for both a “true” sine wave and the calculated RMS values, the results of which are also shown on the graph.

What this gives us are two values that have a constant value throughout the graph. These are the values that we can actually say are more realistic and reliable since power losses are quite common. A fun thing to notice is how close the RMS value is to the average value, which is why you should always consider it first.

Whenever dealing with anything that involves electrical components, you should always check RMS values of power first; be it an air conditioner or a PC.

In Audio components, however, we always try to match power ratings throughout, so that we don’t end up blowing something and we also get the most out of our audio system. That doesn’t mean peak power should not be considered, it just means RMS values matter more!