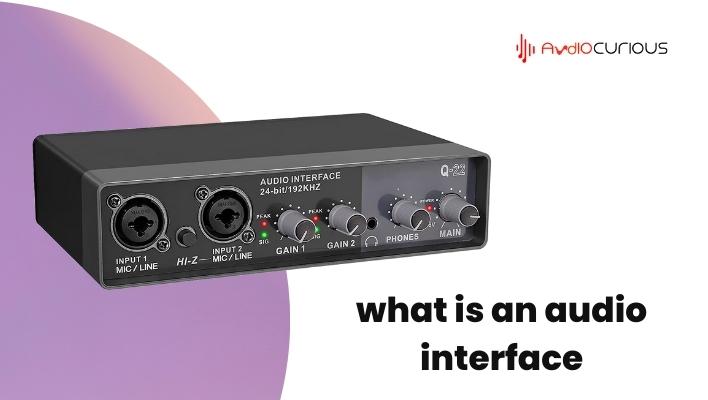 What is an Audio Interface?

An audio interface is a hardware device that connects your microphone, instrument, or other audio sources to your computer or recording equipment. It acts as the middleman between your audio source and your recording software, allowing you to capture high-quality audio recordings.

Audio interfaces come with various features and capabilities, including inputs and outputs for connecting your audio sources, preamps for boosting the signal from your microphone or instrument, and built-in effects processing for shaping your sound. Some audio interface inputs offer additional features, such as phantom power for condenser microphones and zero-latency monitoring for recording and performing live. Several audio interfaces are available, including USB, USB-C, and digital.

These are a great choice for musicians who need an easy way to record and playback audio. They are relatively inexpensive and usually powered by a computer’s USB port. USB audio interfaces typically have multiple inputs and outputs for analog and digital signals, allowing them to work with various audio sources, such as microphones, keyboards, and guitars. The interface also provides a direct connection to the computer, which can be used for digital audio recording and playback.

Do I need an Audio Interface?

If you want to record multiple instruments simultaneously, an audio interface with multiple inputs can make connecting and recording multiple sources easier.

If you want to record multiple tracks simultaneously, an audio interface with multiple outputs can make it easier to route each track to a separate recording channel in your DAW software.

While an audio interface can be beneficial for these reasons, there are alternatives to using one. For example, you can use a built-in sound card on your computer if you’re on a tight budget or only need to record a single instrument simultaneously. You can also use a digital audio workstation (DAW) software with built-in effects processing and routing capabilities, eliminating the need for an external audio interface.

Audio Interface for Mac and PC

Audio interfaces are typically compatible with Mac and PC operating systems, making them easy to use with any computer. However, there may be some differences between Mac and PC audio interfaces, such as available features and compatibility with specific software.

When choosing an audio interface for your Mac or PC, it’s important to research and compare different options to find the one that offers the features and compatibility you need. It’s also a good idea to check the compatibility of the audio interface with your specific operating system and software to ensure it will work seamlessly with your setup.

Guitar audio interfaces typically offer a range of inputs and outputs for connecting your guitar and other instruments, as well as built-in preamps for boosting the signal from your guitar. Some guitar audio interfaces include built-in effects processing, such as reverb, delay, and distortion, allowing you to shape your sound without needing external pedals or effects processors.

When choosing the best audio interface for guitars, you must consider your intended use and budget. If you’re a professional musician looking to record high-quality recordings, you may want to invest in a high-end guitar audio interface with advanced features and capabilities.

If you’re a beginner or casual musician looking to record at home, a more affordable guitar audio interface with basic features may be sufficient. It’s also a good idea to research and compare different guitar audio interfaces to find the one that best meets your needs and fits within your budget.

In conclusion, an audio interface is a valuable piece of equipment for musicians and audio enthusiasts. It allows you to connect your audio sources to your computer or recording equipment and capture high-quality recordings. Whether you need an audio interface depends on your individual needs and goals, but it can be a valuable investment for improving sound quality, connecting multiple instruments, and recording multiple tracks simultaneously.

Audio interfaces are available for Mac and PC operating systems. There are also specialized audio interfaces for guitars and other instruments. When choosing an audio interface, it’s important to consider several factors, including your intended use, budget, and compatibility with other equipment.