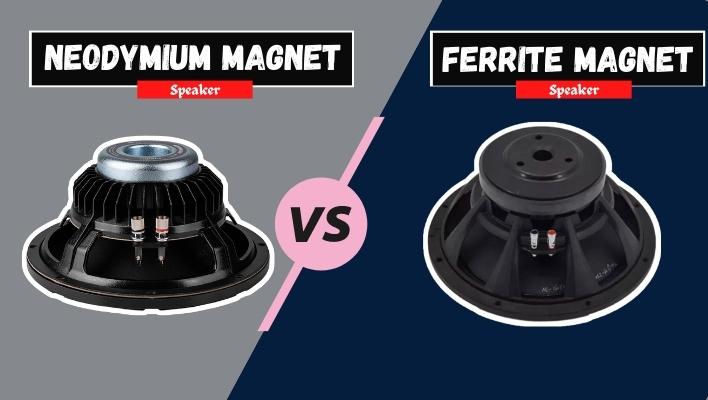 When it comes to sound quality, there are two schools of thought: those who believe in the power of neodymium speakers and those who swear by ferrite speakers. So, which is better?

Whether you’re trying to pump up the bass for a party or looking for a high-fidelity sound, you have many speaker options available that can deliver impressive results. Two of the most popular choices are ferrite speakers and Neodymium loudspeakers.

Ferrite and neodymium speakers work by converting an electrical signal into sound. The main difference between them is the type of magnet used in the construction of the speaker.

In this blog post, we will explore the differences between ferrite and neodymium speakers to help you decide which one best fits your needs. Discover their related advantages, drawbacks and applications, so you can determine which type of speaker is right for your project or performance space. But before we talk about that, let us first understand what is the role of magnets in speakers.

Role of Magnets in Speakers

Magnets play an important role in the making of speakers. They work by creating a magnetic field that moves the speaker cone back and forth, creating sound waves. The magnet concentrate the electric current from the amplifier, which is then converted into sound. The stronger the magnet, the louder and clearer the sound will be.

The magnet could be made from either ferrite or neodymium. It creates a constant magnetic field around the conical voice coil attached to the back of the diaphragm within each enclosure.

But why do subwoofers have magnets? Let us find out!

Why Do Subwoofers Have Magnets?

Subwoofers are speakers specifically designed to produce low-frequency sounds, such as bass and sub-bass. They are usually larger than regular speakers, and are placed near the main speakers to fill in the bottom end of the sound spectrum.

To do this effectively requires stronger permanent magnet motors, such as those found in both neodymium and ferrite subwoofer systems. These drivers must move quickly enough so that low-frequency sounds can travel across large distances without losing their intensity or clarity.

As discussed above, the two most common types of magnets used in audio speakers are ferrite and neodymium. Let us now explore the differences between them to determine which is best suited for a range of audio applications.

What Is a Ferrite Speaker?

A ferrite speaker is a type of magnetic transducer that uses a permanent magnet made from an iron-based material to create an electro-magnetic field when current passes through it. This electromagnetic field causes the diaphragm to vibrate, which then produces sound waves.

Ferrite speakers are typically used in small devices such as portable radios or laptop computers due to their relatively compact size and low cost.

Ferrite speakers tend to be less efficient than neodymium speakers, meaning they don’t produce as much sound per watt. This can lead to a muddier, less defined sound.

What Is a Neodymium Speaker?

Neodymium speakers use rare-earth magnets made from neodymium and other elements instead of iron-based materials like ferrite magnets. Instead of producing an electro-magnetic field when current passes through it, neodymium magnets generate a permanent magnetism in the speaker itself without needing any external power source.

Applications Of Ferrite Vs Neodymium Speakers

Ferrite and neodymium speakers can both be used for various applications. The type of performance and budget restrictions will determine which is best for a particular project. For example:

When deciding between ferrite vs neodymium speakers for your audio setup, there is no clear winner. It will ultimately come down to personal preference based on what factors you prioritize when making your purchase decision.